What High School Football Can Teach You About Marketing 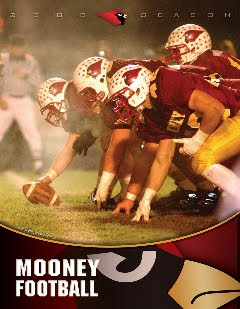 I was cold, muddy and tired as I stood on the sideline next to Don Bucci, the head coach of our football team. He surveyed the situation; it was 3rd down with 4 yards to go.
Then, in the ear hole of my helmet, he said, “Sweep right.” I ran in and told the quarterback. He called the play, we ran it and got the first down. Then I came out to get the next play.
There were no radio helmets in 1971. Even the NFL didn’t have them. So plays were brought into the huddle by an expendable player like me — a guard on the offensive line.
DO WHAT WORKS
We had over 20 basic plays in our playbook, but 80 percent of the time we ran four: Power to Ted Bell, Sweep to Ted Bell, Belly to Steve Komara, or Iso to Ted Bell.
Once in a while, Coach would call a pass play and I’d start to run in. Then he’d yank me back by my shoulder pads and say, “Make that Belly Right on Two.” I’d be thinking, “Yeah, big surprise.”
But with those four plays, we went undefeated and won the championship. Coach stuck with what works — and you should too. Is it TV, radio, direct mail? Whatever works, stick with it. The right play can win the game.
TRY SOMETHING NEW
That year we tried something new. We kicked a field goal — the first ever in our history. It worked! So we did it several more times that year. What can you do that’s new? Online advertising? Social media? Try it…it just might work.
MOTIVATION
Our coach was famous for his pre-game speeches. We were so fired up coming out of the locker room, we almost hurt ourselves getting to the field. But that fire kept us going in tough situations. You may not be a strong orator, but you can inspire employees with encouraging and positive words.
RESEARCH
Game films and scouting opponents are givens in football. Why don’t you take one afternoon each month and scout your competitors? Look at their websites, clients and sales materials.
TEST
The first offensive series we ran were always meant to test our opponents’ strength. The other team knew what plays we were going to run. But our coach wanted to see which plays would work against them. So he tested them. If they worked, we ran them again and again. If not, you rarely saw that play again. How do you test and measure your marketing efforts?
BRANDING
Wearing a letterman jacket was a source of pride. If you went to another team’s games, you were instantly identified and proud to be recognized. Is your brand that strong? Would people wear your logo?
REWARD
We received stickers that went on our helmets when we made a good play. They didn’t cost much, but they were highly valued by players. What do you give customers as a reward for returning and buying?
Apply these lessons from high school football to your marketing. You’ll win a lot more than games.
Stay tuned and stay smart.

Show ’em the down side — and sell more WE DON’T LIKE CHANGE Most humans avoid change. We only change when we must. When we do change, we change as little as possible.For example, let’s say you love pizza and wings. But every pair of pants you own is so …