ARE CREATIVE PEOPLE "QUIRKY"? Or are we just crazy, lazy and sloppy? 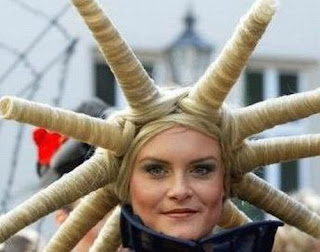 I get away with a lot…especially when it comes to my business attire. You see, I tell my professional clients (male) they should wear a tie and jacket at public or business events and meetings because it sends a message to the others that says, “you are important enough for me to dress up.”

Yet, when I go to a meeting or public meeting, even with these same clients, I’m usually the only guy NOT wearing a tie. Sometimes I don’t even have a collar to put the tie on — just a black T-shirt (ok, it’s a Calvin Klein collarless casual sports shirt — but it still looks like a T-shirt) along with a sports jacket and jeans. But you see, I am “creative,” so I am generally excused from conformity.

Is being creative really just a cop-out for being lazy and sloppy? Until recently, I didn’t think so. Then I took a closer look.

MESSY OFFICES
I am a clean person. I wear clean clothes. I’ve even received guff for taking a shower before workouts at the gym. On the flip side…my office is a mess. I’ve lost things in my own office because — despite the best effort of my young assistant who constantly straightens up after me — my office always looks like it was “tossed” by spies looking for a secret formula. So am I a closet slob? No…I’m creative.

MESSY CARS
Let me ask you…what’s inside your car? Here’s a brief recap of what’s in mine: three empty sugar-free Red Bull cans, 8 or 10 empty water bottles, four pairs of sneakers, a dozen client files, about a half-inch of mud on the floor from my last climbing/hiking trip, $50-60 worth of coins scattered everywhere, coffee stains all over the light-colored leather, bluetooth headsets, keys from a police car (long story), an old bottle of prescription antibiotics (longer story), a Solar FlexRack flash drive, a cycling helmet, ticket stubs from movies dating back to the first Hangover, coupons I never use, a Farris coffee cup and something that is either a dead bug, a old vitamin or maybe a raisin.

But messy cars are OK for those of us who are creative…right?

ABSENT-MINDED AND FORGETFUL
Creatives are expected to be absent-minded and forgetful right? If so, I am definitely creative.
Get this — in my office, staffers have a policy when I ask for a copy of something. When I ask for one copy, they make TWO —  one I get immediately — and one I get when I lose the first copy.

Am I “quirky” or crazy? Well, I’m the boss, so I’ll call it quirky. Of course, my partners and staff might say otherwise. Especially when they watch me leave the office and then return twice to get my phone or briefcase or car keys.

I also have a habit of leaving things on my car roof when I get in or out. Coffee, files and many packages are often seen flying off my car on the way out of the parking lot at Clifton and Market Street in Boardman.

I’M NOT ALONE
I’m not alone with the car roof issue. Ellie, a good friend and client, shared what has to be the “topper” of forgetful roof events.

Ellie is about half my age and about twice as creative. She told me about the time she was bringing a bowl of pasta salad she made to picnic or party. On the way, she witnessed a car accident on busy Rt. 224. One car had rear-ended another and traffic was stopped.

Ellie was waiting for the traffic to get moving again when she glanced over to the accident scene. That’s when she noticed that the driver who did the rear-ending was pointing to her roof. Apparently, he hit the other car because he got distracted when he saw the bowl of pasta salad on the roof of her car!

DO WE NEED A SUPPORT GROUP?
I’m wondering if we creatives should have our own support group. But I doubt it would ever happen. We would never agree on the branding — should it be called Messy People Anonymous…Creatives in Crisis…or Forgetful but Fearless?

And even if we could agree on a name, we’d probably lose the meeting schedules — or just forget to attend.

I don’t believe that all creatives with these quirks are crazy, lazy or sloppy. On the other hand, I can’t guarantee they aren’t. But let’s face it, it’s a great excuse isn’t it? Try it and you’ll see what I mean.

The next time someone complains that you left a mess, or forgot an important meeting, just say “I realize I left a mess…but wow…have I got a great idea!”

Starbuck’s, McDonald’s, Mercedes, BMW, Nike, Reebok, Budweiser, Coors, Raisin Bran, Special K, ESPN, NFL, Home Depot, Loews, Macy’s, Target and dozens of other brand names are well known to me.  But yesterday, all of these names faded away. A new name overtook every brand I ever knew: Nico. NICO was …