THE WORST MISTAKES IN MARKETING 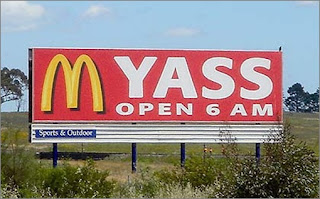 FUNNY IS FINE…IF IT REALLY IS FUNNY

We’re sitting in the darkened editing suite. We just viewed a commercial I shot and edited. A client asked me to shoot what he thought was a funny concept. I cringed, but wanted to keep the client happy. So now I was asking questions.
Me: “That’s not funny, is it?”
Editor: “It’s KINDA funny.”
Studio owner: “It’s probably funny to the target market.”
Me on cell phone: “Look at the spot I just sent you. Is it funny?”
My son: “It sucks.”
Me: “That’s what I thought.”
Now I had to go back to the client and convince him to junk the spot and shoot another. He junked me instead.
What was the worst move here? Going back to the client, or agreeing to shoot the clunker in the first place?
Trying to create advertising that is funny is a difficult challenge. It rarely works when developed by amateurs, and when it does it doesn’t have much of a shelf life.
What really makes attempts at humor one of the worst mistakes in marketing is that it takes the focus off the benefits of the product.
Be careful when attempting to be funny in your marketing, or the results can be very sad.
NOTHING TO SHOW AT A TRADE SHOW

We develop lots of trade show booths, as well as marketing used before, during and after trade shows. We’ll book the space, design the booth, and develop trade publication ads to hit before the shows. Often, clients also need e-newsletters or customer invitations prior to the show, and follow-up mailings and sales lead follow-ups.
One thing we’ve learned is that you need to show something (besides you and some brochures) at trade shows.
People come to interact with other people, that’s true. But they need some sizzle to attract them to that steak. They want to see, feel, touch, try, use — or at least see a demonstration.
Ideally, you would have a sample of the actual product at the show. But if you can’t do that, then have a video showing it in action…or videos of customers talking about why they love it…and/or an animation showing the product in use.
Sure, you may have a dynamic personality. You may be a hit at every party. But this is a trade “SHOW.”  Show prospects something if you want them to stop at your booth and consider your product or services.
SPIN — THE ULTIMATE SIN
When a potential client asks me if I can put a “spin” on a certain topic that affects their organization, they’ll almost certainly be told that “spin” is not in my vocabulary and it should be eliminated from theirs.
The word “spin” is often used in place of the word “lie” or “exaggerate,” or as a euphemism for “bending the truth.” In place of spin we suggest a different strategy — it’s called “TELLING THE TRUTH.”
Look, we’re not suggesting you become a martyr and kill off your own brand or company when a mistake is made or something is less than perfect. But lying and calling it spin won’t fix it.
The people who tend to use this word most are government officials and politicians. They watched too much election coverage and the “Spin Room” where the spokespeople for politicians tell you what you heard after a debate featuring their candidates.
When an official or candidate wants to use spin, it’s usually because they don’t know what answer to give to a reporter or constituent. What do you do in this situation if you don’t spin? Say, “Honestly, I’m not sure right now. Let me get back to you on that.”
What if you the answer to the question does not look favorable for you, or there is no really good way of saying something that you know is not going to be received well. Say: “There’s no easy way to say this, and I know it doesn’t sound good. But the truth is…”  or “I’m not happy about this…and I expect to do better next time, but that is the truth.”
SUBSTANCE WITH NO STYLE
Sure it is bad to be all flashy and all stylish without content. But the reverse is true also. It doesn’t really cost that much more to make your marketing a lot better looking and consumer friendly. Style translates to exciting and interesting in marketing and it’s a mistake to be anything less.
MANY MARKETING MISTAKES

There are plenty of mistakes in marketing and I don’t want to give a major pitch here (would that be “spin”?). But using experienced marketing professionals helps reduce the chances of making some of the worst mistakes.


It’s not that we haven’t made them.
We have.
That’s why we know better this time.

Thanks for attending. I’ll see you at the next Brand Camp.
Peace.

I could see the rides. I could hear the midway game barkers. I could smell the french fries and…well…the horses that apparently had their dinner earlier that day. It all seemed so far away even though were were close. My five-year-old feet were tired from walking to the entrance from …