Carmstrong: You can have Lance… I’ll take Carmine 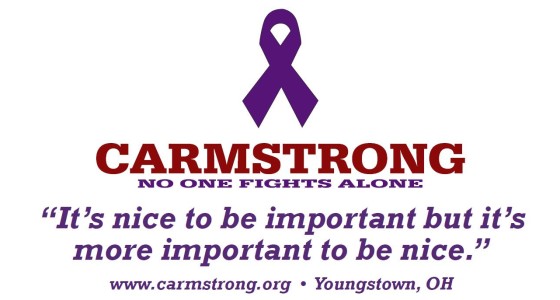 Until recently, millions of us held a guy who wore yellow Spandex in high esteem. He beat the odds and won the Tour de France a record seven times. He rode his custom-built bicycle to championships in exotic locations all over the world.

But consider Carmine Cassese, owner of Cassese’s MVR Italian Restaurant and Bar — which is found in a somewhat less exotic location on Walnut street in the Smokey Hollow area near downtown Youngstown. Carmine favors a slightly more traditional attire of jeans and a YSU or Ohio State Buckeye shirt.

One of the reasons I admire Carmine and his MVR Italian Restaurant is that he has always practiced what I preach when it comes to marketing: Stand out. Connect. Succeed.

The MVR stands out for a number of reasons. One is its location. While downtown Youngstown is experiencing a bit of a revival now and a lot of new restaurants are starting to open, that’s really just a recent development. For many many years, the MVR was one of the few thriving spots near the city center, an oasis of sorts in a very depressing economic atmosphere.

Carmine bucked the trend of heading to the suburbs; instead, he reinvested in the MVR in the same place it’s been for almost 80 years. He added bocce courts and outdoor bars and seating. Then he ramped up bocce leagues, opened a catering hall on-site and started hosting major events.

The menu expanded, and so did the crowds. This once shot-and-a-beer joint is now known more for its Whitefish Diablo, Tressel Tortellini and SPS sandwiches than Budweiser or Coors Light.

And while some places struggle to get crowds in on weekday nights in the summer, the MVR is hosting hundreds of people who participate in bocce leagues stretching late into the night. Yep, the MVR stands out in this market.

And though other restaurants count on coupons for traffic, Carmine, his wife Patty and the rest of the Cassese family count on connecting personally with people. They like people, and people like them.

Eating at the MVR is like eating at the Cassese family home. It’s not unusual to see Carmine and Patty spend most of the lunch or dinner hours talking with customers. Sitting down at the table with you…listening to you…laughing with you…sharing with you…connecting with you.

The Casseese’s MVR is a great example of how to stand out, connect and succeed. But the Cassese family suddenly found itself facing a greater challenge than the restaurant.

Carmine, who is in still in his 50s, was diagnosed with pancreatic cancer. Everyone who knew him was fear-stricken. But how did his family and friends react? They mobilized.

People reached out. Among them, former YSU and OSU head football coach Jim Tressel, who recommended the OSU James Cancer Center in Columbus.

T-shirts were made that read “CARMSTRONG… No One Fights Alone.” Sales of the T-shirt benefit a scholarship in Cassese’s name and the James Cancer Center.

On February 27th, Carmine underwent a 5 ½-hour surgery that went really well. A “small” contingent of 30-40 T-shirt wearing friends and family made the trip to Columbus to show their support.

At last report, Carmine is doing exceptionally well and is expected to return home soon. He is once again standing out and connecting. And with the continued support and prayers of his friends and family, Carmine will once again succeed.

I looked across the dance floor of the typical large Youngstown-style wedding reception. Past the cookie table that is so unique to our area. Among the men and women in suits and gowns is a young male Marine, maybe 27 or 28 years old. About the same age as one …