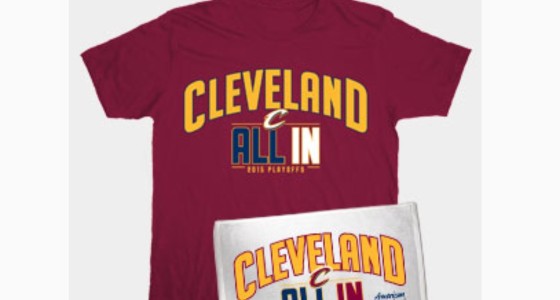 If you happened to be one of the more than 23 million viewers who tuned in to watch NBA finals featuring the Cleveland Cavaliers and the Golden State Warriors, you may have noticed noticed a pretty amazing sight.

Almost every fan was wearing a matching T-shirt. Yes, the fans, not the players (they always wear matching shirts). But during the finals, you would see close to 20,000 fans wearing the same shirts. It didn’t matter if it was Quicken Loans Arena in Cleveland or Oracle Arena in Oakland.

My first thought when I saw that was simple: “That’s awesome.” That’s where the civilians leave it. But to us marketing types, you start thinking about it a little more, and questions pop up. What’s behind it? Why do it? How did they do it? What did it cost? How did it work?

Well, the first thing you should know is that the Cavaliers and Golden State Warriors didn’t come up with giving away T-shirts for important games. Neither did the NBA. In fact, most people credit the Winnipeg Jets hockey team of the mid-1980s for the idea of all fans wearing no-cost team-provided T-shirts. But the idea quickly spread to other sports.

The free T-shirt boom blossomed during the same period of time when the sales of replica jerseys and other very expensive licensed merchandise was exploding in most major- and minor-league professional sports.

In the NBA, most teams do a T-shirt giveaway for important games, though a couple still stick to the cheaper hand towels and trinkets. But most teams are not intimidated by the roughly $100,000 cost per game ($5 per shirt x 20,000 fans). That’s probably because in most cases, there are corporate sponsors for each of the giveaways. In that case, the cost goes down to a sweet, sweet zero.

The cost may be low after sponsors pay for it, but it can be a logistical nightmare. During finals, games are sometimes two days apart. And if your team is eliminated and you’ve printed 20,000 shirts, those shirts will likely be sent to the poor of some third-world country. More likely, the team has lined up a supplier willing to work all night and crank out what is needed ONLY if the team advances.

What makes a fan wear this free T-shirt? Often you’ll see someone removing a licensed replica jersey that cost $80-$100 in order to put on the free t-shirt. Why?

In part, it’s peer pressure. The T-shirts are draped across each chair in the arenas. Announcers ask fans to wear them to support the team. The camera operator may zoom in on those who are not wearing the colors, and that fan could be met with a chorus of boos and “encouragement.”

And considering the expense of attending pro sports (tickets for even the upper deck at Quicken Loans Arena were $250-300 for the finals) versus just watching it on a hi-def 55 to 80-inch big screen in the comfort of their own homes, fans who attend the game deserve a special keepsake.

Is it conformity? Let’s face it, most people want to fit in. The sea of same color and design builds the team brand. And wearing the shirt gives fans a sense of community.

But only one in four websites are mobile-ready. If your website has not been optimized for mobile viewing, it’s difficult to view and links don’t work well. Worse, Google lowers your search ranking. Prospects who do find your website leave quickly and end up on your competitors’ mobile-friendly sites. A …