Nike’s Secret: You Can’t Just Do It. 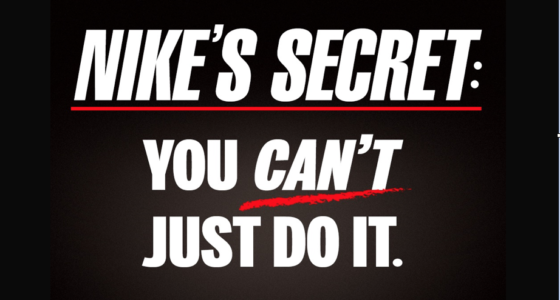 If you’re interested in marketing, you know about Nike. Or, at least you think you do. You’ve probably followed, watched and maybe even tried to emulate Nike’s edgy ads and clever marketing campaigns. You may even know that the iconic Nike logo was developed by a free-lancer who did occasional ad slicks and brochures for Nike’s predecessor, Blue Ribbon Sports.

Yes, graphic artist Carolyn Davidson brought in a number of designs and one was chosen — for which she was paid $35. Her only direction from Nike founder Phil Knight was to come up with something that “conveyed a sense of motion.”

They settled on what we now all know as “the swoosh.” The people around Knight said it looked like a wing, or a whoosh of air or something a runner might leave in his or her wake. In a time crunch for an important trade show where they hoped to introduce the new brand in 1971, the founder said “I don’t love it, but maybe it will grow on me.”

If you’re a real marketing “insider,” you may even know that the famous “Just Do It” tag line was developed by Nike’s ad agency Wieden and Kennedy. And that Dan Wieden’s inspiration was convicted murderer Gary Gilmore, who was executed in Utah in 1977 by a firing squad. When asked if he had any last words, Gilmore said, “Let’s do this.”

And almost everyone who pays attention to sports knows that Nike has given out some of the largest endorsement deals the world has ever seen. Superstar athletes like Michael Jordan, LeBron James, Tiger Woods and dozens of others were given millions of dollars — and in some cases, lifetime contracts.

So you think you know Nike. I thought I did, too. Then I read Phil Knight’s memoir Shoe Dog. And I got a whole different perspective on the company and the brand. I’ve always liked their products and loved their marketing. But now I have true respect and admiration for the organization.

Though Nike did $30 billion in sales last year, in its first year (1983) annual revenues were just $8,000. Even Farris Marketing did more than $8,000 in 1983. And though Nike’s sales started doubling and tripling as it grew to overcome rivals Adidas and Puma, it often had tremendous cash-flow problems. They were always teetering, struggling to pay their bills, taking on huge debts and begging banks for loans. They’d “float” checks, hoping they wouldn’t be cashed until enough money was in their account.

At one point, their employees’ paychecks bounced. Company credit cards were confiscated and cut up when the founder and a top officer were checking into a hotel. And Nike has had enormous fights with the government over import duties, taxes and other issues.

Through it all, Phil Knight kept fighting and pushing to survive and make it to the finish line. As a middle-distance runner in high school and college, he knew what it was like to be out of energy even though you have three more miles to run. You can’t breathe, you’re exhausted, your legs are gone. But you know you can’t quit. You keep pushing and pushing.

We put on sports apparel like Nike and we subconsciously think, “I wear this, and I look like a winner. I am a winner. I’m going to win.” But the real secret, according to Knight, is that we must “work and study, study and work, as hard as we can.” Can you just do that?

When Ike and Tina Turner recorded “Proud Mary” in 1970, Tina added these words to the beginning — “Well ya’ know, every now and then, I think you might like to hear something from us ‘nice and easy.’ But there’s just one thing… you see we never, ever, do nothing …