The Difference Between Branding and Positioning (and Why You Need Both) 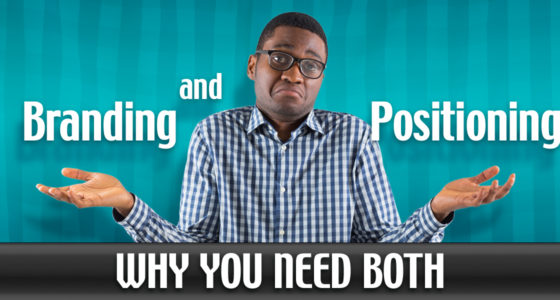 Branding and positioning are two important terms that are related but have different meanings and functions. If you want your marketing to be effective, you need to understand and use both.

There are dozens of definitions of both terms, but I look at them in more direct and simple way.

Branding can be likened to math. Take a brand name and show or say it 250,000 times on TV, radio or social media — and a lot of people are going to recognize that name.

How important is brand recognition? Very. Experts differ on exact numbers, but it’s safe to say that you’re twice as likely to buy a product or service with a name you recognize vs. one with a name you’ve never seen or heard.

Positioning is more related to language. It uses words (mostly) that differentiate the product, service, company or person from the competition. It should leave you with an impression of its position (or rank) among the competition. It may be number one in quality or in affordability. Positioning can also label a product with certain qualities or attributes — such as innovative, exciting or unique.

Branding has many components — name, logo, maybe a symbol or icon (like the Nike Swoosh), colors, styles, etc. Brand managers try to get these components in front of as many people in the target audience as possible.

Positioning may have several components also — like the positioning statement or “tag line.” Positioning encompasses words and images that support the image and ranking you want the target audience to accept.

Both branding and positioning can have a very powerful effect on the desirability, demand and sales of a product or service.

Here are examples of positioning that has worked well and in a positive way for a brand you’ll recognize: Walmart – lowest prices; Target – lower prices and some cool stuff; BMW –high performance; Apple – innovative, high-tech and quality.

In 2016, we’ve also seen one of the best examples of “negative positioning.” Donald Trump, the Republican nominee for President, used negative positioning to label his opponents all through the primary election season with devastating effectiveness.

Trump labeled Jeb Bush as “low-energy Jeb,” and the candidate was then seen by many as someone who had tired ideas and no real motivation to work hard. Trump labeled Marco Rubio is “little Marco,” and Rubio was then seen as a petty and ineffective person. Ted Cruz was labeled by Trump as “lyin’ Ted,” and saw the credibility of his every word and action questioned.

Trump’s attacks were helped by Branding Math. When he made these negative positioning statements, millions of people heard them. He was covered with billions of dollars worth of prime broadcasting time.

Changing your brands, improving your position

Can you change your branding? Yes. It’s not as difficult as some say. With an image that stands out and connects with your audience and the right amount of media, you can change just about any branding.

Can you improve your position — even a negative one? Yes. It’s more challenging than changing a brand, but it can be done — and I’ve helped a number of clients do this. The key is to first identify and understand the market you’re serving.

Once you understand these differences between Branding and Positioning, you can use them both — and make your marketing twice as effective.

Does the thought of having “fans” for your product or service seem far-fetched? After all, your fans have to buy your product and pay for it. So is that even possible? Yes. You can have fans…and believers and advocates, too. And the way you develop them may surprise you. Of course …