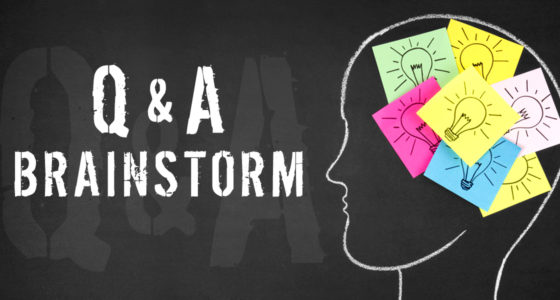 Some people might call it brainstorm. But don’t get excited. It’s probably more of a “brain-light shower.” When readers contact me on social media or via email, I usually reply to questions via whichever medium was used to ask the question. But it occurred to me that, since many people ask similar questions, I could answer a bunch of them in one column. So here goes.

A. That really depends on the goal. In general, if you have the budget, mass media will get most messages across and improve your branding and positioning faster, and maybe with more lasting impact. TV, newspapers, etc. are likely to be seen by more people and be verifiable. The caveat is that it usually requires a larger budget. The original marketing lure of social media was the low cost, with the dream goal of your post or video going “viral.” But I’m sure you know that the chances of you producing a video that goes viral are pretty slim. I do love the way you can target social media. And the cost of boosting posts or advertising is still very reasonable. But to have the kind of impact you get from mass media, you need a substantial budget. So which works better? If you have a decent budget, mass media is still the ticket for you.

Q. What is your favorite marketing quote?

A. “Say everything — say nothing.” This refers to the danger of jamming too many words in your ad. Trying to say everything will make it impossible for anyone to understand or remember your message.

Q. How much money do people make on YouTube?

A. The formula is based on ad views, but in general terms, you can make about $10,000 for every 100,000 views. In 2014, a person who simply unpacked and showed the features of new toys in her videos (with no animation or special effects) made $4.9 million.

Q. What’s the difference between Branding and Positioning?

A. Both terms are overused, because they focus on just one aspect of your marketing — whereas most organizations need a comprehensive approach. A brand may include all aspects of your identity — name, logo, colors, etc. Branding is about repetition of your name or brand image. Position refers to the ranking in the customer’s mind of a product or service compared to the competition. Positioning differentiates your product or service and makes it more desirable. Positioning aligns with consumer interests and creates attraction and action. In simple terms, branding tells people what to buy, and positioning tells people why to buy it.

Q. What are your favorite tag lines?

A. My favorites are those that have lasted the longest, had the biggest impact and are remembered. Examples might be BMW’s “Ultimate Driving Machine” and Nationwide’s “Nationwide is on your side” (which is also a jingle). They’re seldom seen now, but slogans with animation are historically among the most successful; e.g. Tony the Tiger for Frosted Flakes (“They’re GREAT!”) and the Jolly Green Giant (“Ho, Ho, Ho…Green Giant”).

Q. What are the best fundraisers for non-profits?

A. It’s unlikely the Ice Bucket Challenge for ALS will ever be topped for the amount of dollars raised. But actually, the best fundraisers today are less about raising money at one event. Instead they create awareness, demonstrate support and get new people to follow and advocate for them.

Thanks for reading. I hope you didn’t get too wet. If you have more questions, contact me via email or social media and I’ll try to answer them.

The ocean does a lot of false advertising. “Come and visit me,” it beckons. “I will relax you. You will be rested.” If that message was not false, then at very least, it was targeted for some other demographic than me. While I was at the beach this past Labor …