Marketing and The One-Man Band 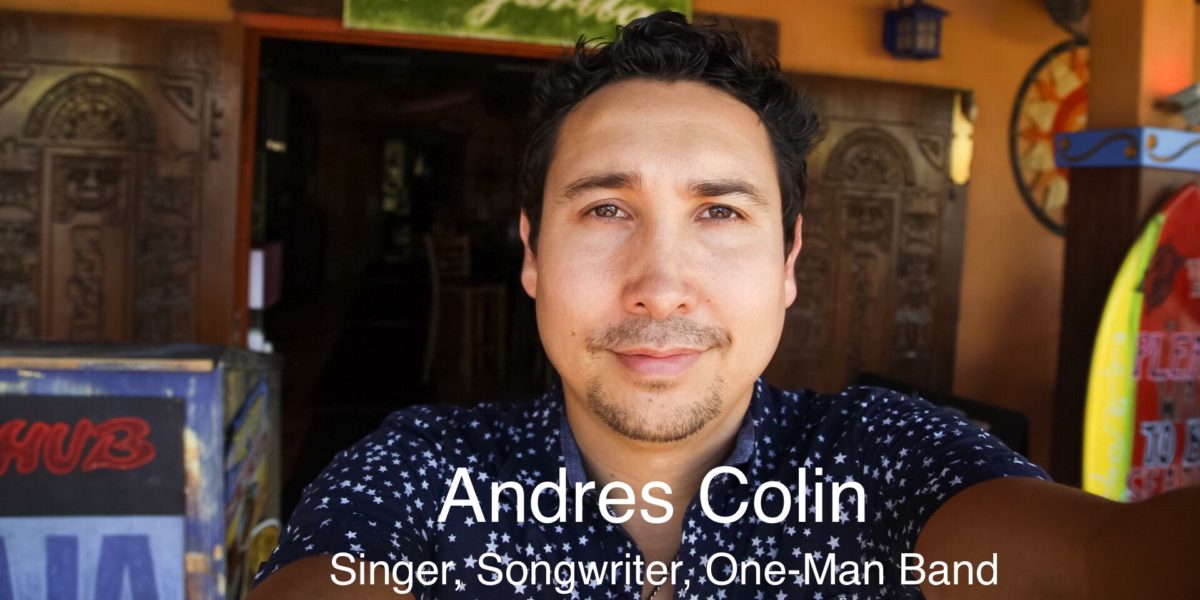 It’s 8:30 p.m. and many of the tourists in this southwest Florida resort town are just starting their evening. But Andres Colin, singer, songwriter and one-man band, is already two and a half hours into his gig on the open-air patio of The Hub Baja Grille.

Even though the sun set a few minutes ago, it’s still hot in Siesta Key — 91 degrees, down from a daytime high of 98. Andres is sweating and would like to take his first break. But the enthusiastic crowd of vacationers wants just one more song. And Andres gives them what they want.

He finishes up with the Pharrell song Happy and throws kisses out to the crowd. He poses with children and adults for a few photos that are Facebook-bound, then finally takes a 10-minute break.

The term “One-Man Band” conjures up images of amateurs auditioning for a slot on a talent show. But Andres is a professional musician and entertainer — a talented classical guitarist with a decent voice and an amazing musical talent. His music is eclectic – from pop and love songs to 70s rock to a favorite by Italian tenor Andrea Bocelli. He can sing in English, Spanish, Portuguese, French, Italian and Greek.

While he sings, you see Andres play the guitar, but you might hear several instruments. That’s because Andres has recorded every instrument used in the song live with percussion and synthesizer guitar, so it sounds more like a full band accompanying his singing — hence the “one-man band” description.

If mastering so many instruments, languages and skills were not impressive enough, he was also mastered the art of marketing himself.

With a charming accent, infectious smile, easy going personality, Andres thanks the crowd of boomers, millennials and their children. A second later he reminds them his CD is for sale “here only” $15 each, or two for $20. Grab a business card and get a coupon for a free MP3 download.

He encourages the crowd to take photos and post them on social media. When I talked to him between sets and asked why he had both, a music page and a personal page on Facebook, he assumed I was unfamiliar with social media and helpfully took my phone, “liked” his music page and sent a friend request from me to his personal page — which he accepted minutes later.

I interviewed 31-year old Andres, who been performing since he was seventeen. He tells me he’s of Mexican heritage on both sides of his family, but American on his “other side.”

I asked him about music and marketing and here is what he said:

I was born in Chihuahua, Mexico, and came here when I was around 20 years old. I love music, and I love so many different genres, I also love languages, and traveling. That is why I started learning songs from different countries and different genres and it has worked for me to get gigs and to please the crowd. I am an American citizen now.

I do all my marketing by myself, my main tool is video, I have a nice DSLR Canon camera that I used to film of my gigs and make video blogs.

In my opinion, the mailing list is the number one tool for any business in order to be successful. Once you have a large enough base, you can sell anything you want to sell or organize any concert, and get the people who admire your work to participate in whatever you are selling.”

I don’t know if Andres will ever be a superstar entertainer — but he definitely a superstar inspiration.

I’m a Liar That’s right. I admit it. I lie all the time. I lie so much, they wrote “Liar, liar, pants on fire” about me. As a matter of fact, my pants are smoking right now — and it’s not because I had chili for lunch. Well, maybe the …