How Celebs and CEOs Have Disrupted the News Media 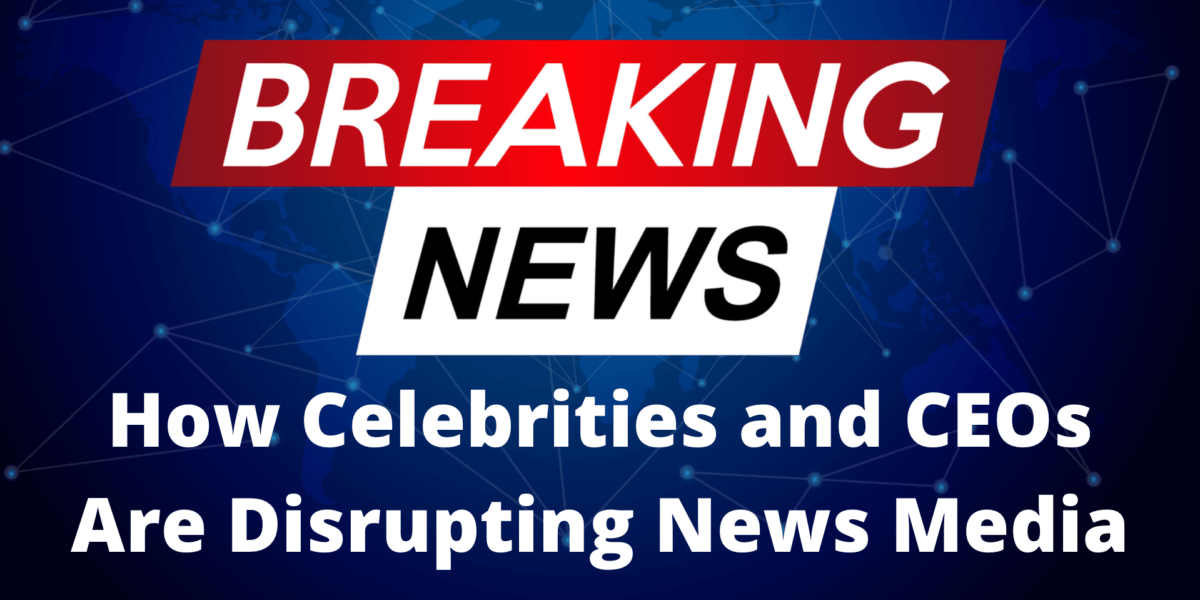 “Never pick a fight with people who buy ink by the barrel.” is a quote often attributed to Mark Twain. It’s a warning, telling us to stay on the good side of newspaper publishers. The people who ran newspapers were powerful and could make you a hero or a reprobate with a headline and a front-page story.

But during WWI and WWII, Americans started listening to more radio news reports for updates on the action and casualties. They didn’t want to wait for the next edition of a newspaper.  That was the first big hit newspaper circulation took.

The third hit was the knock-out blow. In the mid-90’s internet use exploded. Newspapers started writing their own obituaries.

But if you have a story or information you want the public to read, see or hear, you still have to “pitch” the story to the media — TV, radio and newspapers. Many of these news outlets also have apps so they can immediately publish updates.

In a sense, you still have to go “hat-in-hand” and ask for coverage to your story out. At least that’s what most of us have to do.

If you’re Barack Obama or Justin Bieber — or until recently — Donald Trump, you can just put your story out on Twitter. You can use photos, or videos and link to more details on your website.

You can tell your story any way you want. And you don’t need to pitch the story to a skeptical editor or time-crunched reporter. Better still, you’ll have a bigger audience. Obama has 118 million followers, Bieber 112 million and Trump had 80 million.

Elon Musk, the well-known “disrupter” of the automobile manufacturing and space exploration, seems to have come to the conclusion that traditional news media and the PR process are simply no longer relevant for him and his companies.

Industry insiders say the communication team at his Tesla car company was either fired or reassigned by CEO Elon Musk. The entrepreneur thinks the news media treats him unfairly.  So, he is simply going to go around them and be his own media. And he can do that.

Musk’s personal audience” — the 41 million followers on his Twitter account — is five times larger than the combined circulation of the 10 biggest U.S. newspapers.

Does it work? Yes. That’s why Donald Trump has been doing it since 2016.  The traditional news media often retweets much of what Musk, Trump and dozens of others post.

With Musk and Trump, as well as, sports and entertainment stars leading the way, many organizations with big followings on Twitter, Instagram, Facebook and YouTube have started going “straight-to-the-people” with their stories and spins. More organizations will be doing the same.

But word of advice: ignoring the traditional media is risky. Unless you have millions of followers, you’re self-made-media mogul ambitions will stall and fall. Traditional media outlets have a level of credibility that can’t be matched by most organizations.

However, we should probably rewrite that old “ink by the barrel” quote. If Mark Twain were alive today, he’d probably say, “Never pick a fight with someone who has 41 million Twitter followers.”

Words of advice from George Farris, President/CEO of Farris Marketing, are cited in a popular annual list of the nation’s best marketing quotes.  365 Marketing Quotes to Keep You Fired Up All Year is published online each year by skyword.com, the leading content platform company for national brands such as Campbell’s …