GRASSROOTS CAMPAIGNS — do they work on a local level? We’ll find out. 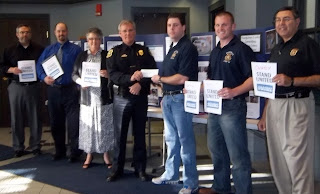 When Farris was asked to develop and manage the Boardman Police Levy, we agreed immediately. And although this is a pro-bono* account, we take it very seriously. Our office is located in Boardman and two of the partners and several staffers live in Boardman.
The situation in Boardman Township, like many Ohio communities, is challenging. The state has cut back a lot of funding and tax revenue is down.
So our police force has been allowed to dwindle to just 47 officers, when we had 63 a decade ago. Worse, as the police force was shrinking, the criminal element was increasing.
And the scariest of all facts is that most of the criminals are involved with selling drugs, or crimes that help them to support their drug habit.
NO ONE KNOWS THIS
Unfortunately, years of a strong police presence have lulled us into thinking there is little or no crime in Boardman. But our police force is now going from emergency call to emergency call — responding to not just car accidents and shoplifters but to reports of serious crimes such as robberies, burglaries and assaults.
The police chief, Jack Nichols, a 34-year veteran of the force, recalls that in his first 20 years on the BPD, there were not even 20 arrest warrants for drug-related crimes in Boardman. Today, there are 2-3 per week! That’s not good.
So we are trying to convince our cash-strapped neighbors to dip into their pockets and agree to pay $117 more a year to increase the size of the police force by 10 officers and another 10 support staff. The force won’t be as big as it once was, but it will help us stem the tide.
A DIFFERENT TYPE OF CAMPAIGN
Early on, we determined the old-fashioned type of political campaign was not right for this effort. Instead, we asked the police chief to head an organization called BOARDMAN COALITION AGAINST CRIME.
Our first goal was EDUCATION. Instead of commercials and political deal-making, we arranged for the police chief and a Coalition member to meet and talk to local block watch groups, condo associations, realtors, clergy —any group that wanted to learn more.
We believe that once people hear the facts, they’ll support the levy. So far, we’ve been right. The smaller groups have joined the coalition and have helped us spread the word and raise awareness.
Our second goal is to DEMONSTRATE SUPPORT. The Coalition developed several events to demonstrate that the levy has public support. The first major event was called “Sign the Car/Show You Care.”  Supporters signed their names on a decommissioned Boardman Police Car in a public event on May 23. The car is now available for the public to sign 24 hours a day at the Police station and two local shopping centers.
Our biggest objective is the GET OUT THE VOTE. This is a special election being held on August 2, 2011. That is an odd day to vote. Nothing else is on the ballot. So it goes against habits for people to vote at that time. We also know a large portion of the vote will be absentee ballots, so we have a heavy emphasis on promoting our issue to that group.
WILL IT WORK?
Only time will tell. It is a good effort put forth by honest citizens who are concerned about their families safety. It’s the right thing to do. Let’s see if the voters agree.
*Actually, we were paid $1 for our services. I joke to my union friends that before Ohio Senate Bill 5, our fee was $2, but Gov. Kasich made us take less.
PHOTO – Chief Jack Nichols accepts a $10,000 donation for the Coalition Campaign from the Fraternal Order of Police representatives. Also present were neighborhood block watch groups and representatives of local realtors and Boardman-area clergy.

Using social media such as Facebook for business and non-profit organizations can be a trap of sorts. You want to interact with customers and prospects — but unlike paid media, messages and responses are more difficult to manage. CEOs are concerned that a nasty rumor will be planted by a …