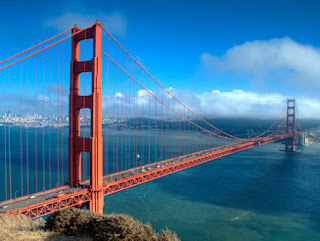 My earliest positioning impressions of San Francisco came from Rice-A-Roni commercials and the TV show staring Michael Douglas and Karl Malden as cops. Every so often I have to travel to San Francisco for business and did so last week. And maybe it was the five-and-a-half-hour flight, but I couldn’t help noticing the branding and positioning screaming at me from all directions. It started at the airport.
THREE BRANDS, ONE FLIGHT
My office manager Katie, purchased my flight on USAirways website. So I assumed I would check in at US Airways. But looking at the fine print, I saw I had to check in at United Airlines — because apparently US Airways booked the flight but was letting United shuttle me to the Bay. Fine.
I went to the airport and stood in the United’s check-in line. I was just getting bored counting the squares on the plaid shirt of the person in front of me when an United employee came over and suggested I go over the the Continental Airlines counter to speed things up. What? Why? Because United — one of the world’s largest airlines with 48,000 employees and 359 aircraft — is merging with Continental. The new airline will use the United Airlines name but Continental’s logo.
You may wonder if this confusing mix of transactions, brand names and logos result in lost business? But the answer is NO. Are you surprised? Don’t be. With the proper messaging and enough media, a company can overcome most name change situations without a major issue. The key here is “enough media,” meaning a “substantial media budget.”
If I am told enough times that the IN door is really the OUT door, I will eventually get it. Although I may bump my head a few times while I am learning this new behavior. The point-of-service (the airport) is likely to always be the most confusing aspect of the merger for consumers. And for regular flyers, both companies will probably offer perks to their existing customers so the customers will eventually be reasonably satisfied and the combined company may actually increase revenues during the merger period.
SKYMALL AND PRODUCTS THEREIN
“Skymall” can there be a better name for a catalogue that relieves the boredom of a long flight with tons of crap you don’t need but might buy anyway? It works just like the “ground malls,” only the selections are not likely to be in Macy’s except when you’re looking for that last minute gift for an uncle on Christmas Eve.
The SkyMall catalogue considers itself a virtual “mall” full of tiny stores (I call them “pages”) filled with things to make you feel better. And considering how cramped and uncomfortable you are when you’re reading the catalogue, it’s an easy sell.
The product brand names are interesting: The Epiphany Massager…The Lumbar Extender…The Vibrating Head Massage. Sounds like they should be sold at an X-rated adult website don’t they? Is that coincidental? Hmmm.
SAN FRANCISCO CULTURE
The destination for this trip was San Francisco where I attended an international solar power trade show. I love San Francisco. But if you think California is liberal, I want you to consider that there is nothing much further LEFT in the state of California than the city of San Francisco. It really seems things environmental and vegan start in San Fran and move east. Residents expect you to agree with their thinking even if you are a meat-eating midwesterner like me. Disapproval is sometimes expressed loudly towards those who don’t agree with their causes. In fact, I swear you can’t swing a dead cat without hitting a PETA rally.
And everyone knows that San Francisco residents champion alternate lifestyles. And really, I don’t have a problem with alternative lifestyles, I just put on my life-partner beater and stop in the little mom + mom grocery stores buy an pack of Hehes and move on.
UNAVOIDABLE….AND THAT’S GOOD
These experiences with the airlines, SkyMall and San Fran culture make it clear that anytime you have interactions or communications with a another person, group, company, city or customer — branding and positioning play into the resulting experience.
But you can use this to your advantage and with a little effort, you can provide a positive impression of your organization.
Now is the time to Rethink. Revamp. Renew. We’ll show you how.
Visit www.FarrisMarketing.com

DRESSING QUIRKY  I get away with a lot…especially when it comes to my business attire. You see, I tell my professional clients (male) they should wear a tie and jacket at public or business events and meetings because it sends a message to the others that says, “you are important …