Is Your Marketing Blending In or Standing Out? 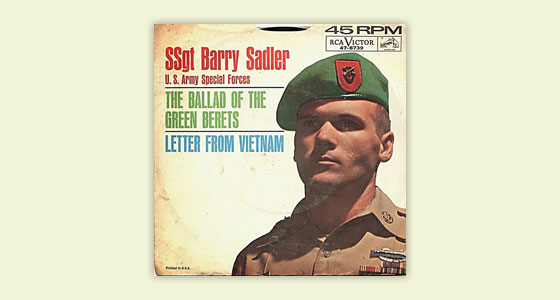 It was the spring of 1966 and we were almost teenagers. Me and my buddies from the sixth grade at St. Nicholas Grade School were pretty excited about going to our first mixed party of boys and girls. We wanted to stand out…show the girls how we were different. We were cool.

It just so happened that “The Ballad of the Green Berets” was topping the music charts that year. It was number one on the Hot 100. The Vietnam War was not yet widely unpopular and the inspiring tune beat out songs from the Beatles and the Rolling Stones.

Me and my buds, Anthony, Tony and Bobbo, decided we were gonna wear berets to the party. Not green ones, mind you, since those were only really available from the US Army and only after you were chosen as the one out of 100 soldiers competing for the honor. No time for that. Our party was less than a week away.

So we each headed to J.C. Penney and laid down a cool $4.50 for black berets. Awesome. We thought we looked like bad-ass soldiers — but in fact, we looked like miniature French artists.

Once we got to the party, we saw that at least 20 other boys had the same idea. Or maybe one of my buddies leaked our plan. I hope not. What Green Beret would leak top-secret party apparel plans to the competition?

To be honest, I was secretly relieved so many others were wearing the black berets. Most of us don’t really want to stand out as individuals, we want to blend in. Blending in makes you part of the crowd, the club or the group.

It’s OK for your crowd, club or group to stand out — but as individuals, we prefer to follow our peers. The problem is that too often these early habits leak into your marketing as well. You use the same media as everyone else, and use the same headlines, offers and incentives as everyone else.

When it comes to media, following the crowd often makes sense for many product and service companies and organizations. The most popular media in your market will usually provide you with the most prospective customers and largest audience. And if you can promote yourself on the popular media in a competitive manner, that’s great.

But if you have a smaller budget you will likely go almost unnoticed. That is the situation in which you want to consider promotions, trade shows, direct marketing and social/viral media efforts. You should also be using these not-so-mainstream approaches if your target market is unique or a true niche.

Sounds like common sense right? But surprisingly, most marketers trudge on with mainstream media — even though they have little chance of standing out, getting noticed or reaching their target audience or niche.

Even if you stick to the popular media, you should at least make sure that your headline, offer or event stands out.

What does “stand out” mean? Different.

Are you excited by a business that offers “quality products and services”? Probably not. Will you at least check them out if they offer “amazing” service? Probably.

Will you be interested in “low, low prices”? Doubtful. How about “ridiculously low” pricing? Probably.

In the end, you want to provide what everyone wants. You want to give the market what they want. But the way you communicate it — your marketing — has to stand out if you want it to be successful.