Why is there so much lying in marketing? 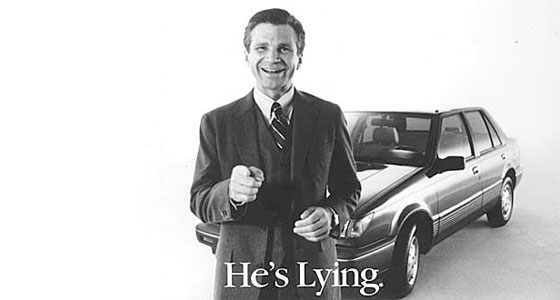 Why do you find those statements hard to believe? Is it because they were made by Joe Isuzu, an American with the same name as the Japanese car he was promoting?

I want to remind you that Joe swore by the offer. “You have my word on it,” he said. “If I’m lying, may lightning strike my mother.” As he said this, the words “Good luck, Mom!” appeared on the TV screen.

Joe Isuzu was a fictional spokesman used in a series of TV ads for Isuzu cars and trucks from 1986-90. He was portrayed as a pathological liar who made outrageous and overinflated claims about Isuzu’s cars.

The ads were a big hit. The cars not so much. They stopped selling them in the USA and eventually stopped production altogether.

And although Joe was a liar, Isuzu was honest about it. The words “He’s lying” appeared underneath Joe’s image in TV and print advertisements.

Unfortunately, we’re still seeing ads with outrageous claims for other products. The categories where the most outrageous claims continue to be made are typically fitness and personal wealth. Yet for every get-rich-quick “system” being promoted, there are 20 to 30 products that promise easy, quick and simple weight and fat loss.

We see before and after images of Jack and Jill who lost 40 lbs. each in 60 days using only this product. On closer inspection, the small type says “These results are not typical. Use in conjunction with a calorie-restricted diet and exercise.”

My doctor had the best response I’ve ever heard to these ads. I brought an ad in and showed him a product I was thinking about buying. He took one look and then said, “George, if a pill could make a someone thin, everyone would be thin.”

I have the privilege of serving on the board of directors of the Better Business Bureau. Not many people know this, but the BBB was originally founded in response to advertising and promotion of medical quackery and worthless drugs and potions — the proverbial “snake oil” business.

But there are still plenty of crafty and unethical marketers out there ready to get away with any lie they can. Why? Because the reward is often great and the risk is often fairly low.

Sometimes the advertisers are held accountable. Skechers used Kim Kardashian to promote its Shape-up sneakers, implying you only had to tie these shoes on to lose weight. Unable to prove the claim, the shoe company ended up paying a $40 million settlement.

Why do we respond to offers that are too good to be true? Because we can’t resist the golden, timeless promise of health, wealth and happiness.

The success of using unsubstantiated claims has bled over to magazine covers. Men’s Health suckers me in every month. “LOSE YOUR GUT — See Results in 9 Days” the cover screams. “MORE ENERGY INSTANTLY — Tap Your Secret Source” it mysteriously promises. My intellect tells me it can’t be true, but my emotions pull out my debit card and buy the issue anyway.

The good news is you don’t have to lie to sell a good product or service. Just do good marketing. The other good news is, I’ve decided to sell my Isuzu. Anyone need a car that is faster than a speeding bullet?

On my first day as a freshman in high school, I spent a lot of time picking up books that seniors and juniors knocked out of my hands. The perpetrators would be laughing 20 feet down the crowded hallway before I could even react. I had to scramble to pick …