Lessons From The Watermelon King 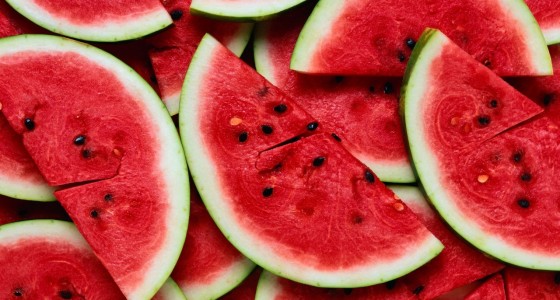 July is usually the hottest month of the year in Ohio. In July of 1966, I was just a kid, and it seemed especially hot. Air conditioning was still a rarity. If you wanted A/C, you went to a movie. In cars and in homes, it was practically nonexistent.

But on Sundays in the summer, I forgot about the heat when I took a ride with my father. I’d sit in the front seat of his pink and black Plymouth — the one with the pushbutton transmission — and we’d head to the east side of Youngstown.

As we pulled up to our destination on Wilson Avenue, I could see cars lining both sides of the street. Dozens of people milled around under the green awnings that hung out from the brick storefront. Several “runners” were loading 35-pound treats in the trunks of customers.

And three or four people were waiting at the “plugging table” near the street. There, a little man with a big knife cut a sample for them to try before they buy.

I smiled at the sight. I would enjoy this hot afternoon. And I would learn some important marketing lessons also. How could I not? After all, I was going to spend the day working for the Watermelon King.

The unofficial title of “Watermelon King” was held by my Uncle Fred, and he was worthy of it. He was the proprietor of Farris Food Market, which featured “Home-Killed Meats and Fresh Fruit.” It was founded by my grandfather, but my Uncle Fred eventually took over and ran the place. No other market — small or large, independent or chain — sold more watermelons in less square footage.

Here are some key marketing lessons I learned from Uncle Fred:

Make It An Experience. When you shopped in my uncle’s market, it was not just a task. It was an experience.

First you experienced the Aroma and the Sights. You saw and smelled an acre of fresh fruits and veggies. It made your mouth water. Why modern grocery stores can’t duplicate that, I don’t know.

Touch and Taste were next. The loose fruit allowed you to feel the textures. Taste-testing grapes and cherries was not only permitted, it was encouraged.

Engagement. No one went unacknowledged by the Watermelon King or his trusty assistant. He’d discuss Georgia peaches and California grapes with you. You’d go home and see the world with every bite.

Visual. My uncle designed his own signs and displays. Like my brother John, he was creative and a bit of an artist. Watercolor artwork and prices were everywhere.

Sometimes he added humor to the visuals. Large red watermelon slices with black seeds had “Watermelon With Vitamin P!” lettered above them.

Super Sampling. This was not the generic sampling you see at Sam’s Club. The Watermelon King used the “plugging table” to cut a small “plug” out of the exact watermelon you were going to buy. If you didn’t like it, you didn’t have to buy it.

Quality. Stores as far north as Ohio rarely carried them, but my uncle was proud to offer the Texas Black Diamond watermelon. It was dark green, and so red inside it looked like it was bleeding when you cut it open. They were giant — averaging 40-50 pounds each.

Service. No one delivered service like Uncle Fred. Every customer was answered with “Yes, sir” and “Yes, ma’am.” And customers never carried their own watermelon to their car — ever.

Think about how you can apply these tips. I was taught them in 1966, but I think you’ll agree — lessons from the Watermelon King are timeless.

It’s five o’clock. You’ve had multiple text messages from friends urging you to join them for a drink at the local watering hole. You’d like to go. You could use a drink. But you also need to do some laundry tonight or you’re going to be wearing YSU sweatpants and …