When It’s Wise to Break The Rules 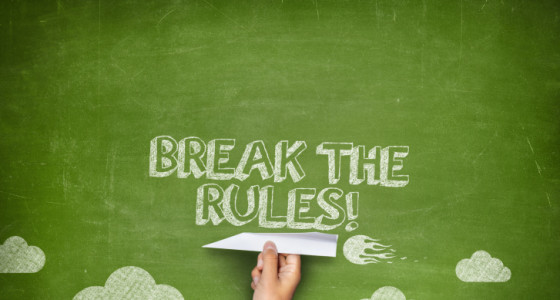 Advertising and Marketing has always had a love/hate relationship with rules.

In the hit TV series Mad Men, the star character Don Draper says, “What you call love was invented by guys like me, to sell nylons. You’re born alone and you die alone and this world just drops a bunch of rules on top of you to make you forget those facts. But I never forget.”

Here is what I do with marketing rules: if the rules get results, I’ll follow it. If not, I break it.

Here are some examples of rules that you might be wise to break:

It is very common for well-meaning folks to point out what they consider improper grammar. Someone took the Library to task for a TV spot that I wrote, which suggests you bring your children with you to the library and bring books home. It should be “take,” the critic said.  I’ve also had folks complain that we’ve used the informal contraction “gonna,” instead of it’s formal cousin, “going to.”

Now, don’t get me wrong, I am not a fan of poor language. When someone says, “it happened on accident,” in a conversation, I can’t help but remind them that things happen “BY accident” and “ON purpose.” That usually earns me a dirty look.

But let’s remember, advertising is at least partly an art. The library is full of books that have purposely misspelled words. Look at any Dr. Suess book. If proper spelling and grammar where a requirement, libraries would need to throw out 80% of their books.

Our obligation is to communicate to our audience in the best manner possible. That often means informal language may only be OK, but encouraged. If that is breaking a rule, then I recommend you break it.

Do you think the inspiration for your marketing should come from a some one of great character like the Dalai Lama, a business icon, or a famous coach?

The famous Nike tag line, “Just Do It” was coined by the owner of Nike’s ad agency who was inspired by convicted killer Gary Gilmore.  Gilmore was put to death on January 17, 1977 by a volunteer firing squad and when asked his last words, he replied, “Let’s do it!”

A new client prospect once asked me if we sit around and “smoke weed” in order to come up with creative ideas.  He was shocked to learn that I don’t drink or use drugs.

There was a time when I briefly bought in to the myth that advertising and marketing people should party till dawn. But it didn’t take me long to figure out that was the least productive approach you could ever take. Break that rule. You are much more creative when you get some sleep, exercise and good nutrition.

Many people expect marketers to brainstorm with a group — they think mass brainstorming sessions produce the best ideas. Break that rule. I prefer to be alone for my first brainstorming and if possible, far away from the office in a coffee shop, down the park even at home. I find solitude produces the most innovation.

The bottom line is that if you want to be successful in marketing, you do need to learn the rules. But then apply the ones that work for you — and break the ones that don’t.

OK, you have a Facebook page and probably Twitter, Google+ and LinkedIn at least, right? So what are you posting on those sites? How many followers do you have? Here’s the REAL question: Do you HAVE a social media strategy? Most businesses and non-profit organizations do not. You know, social media has been …