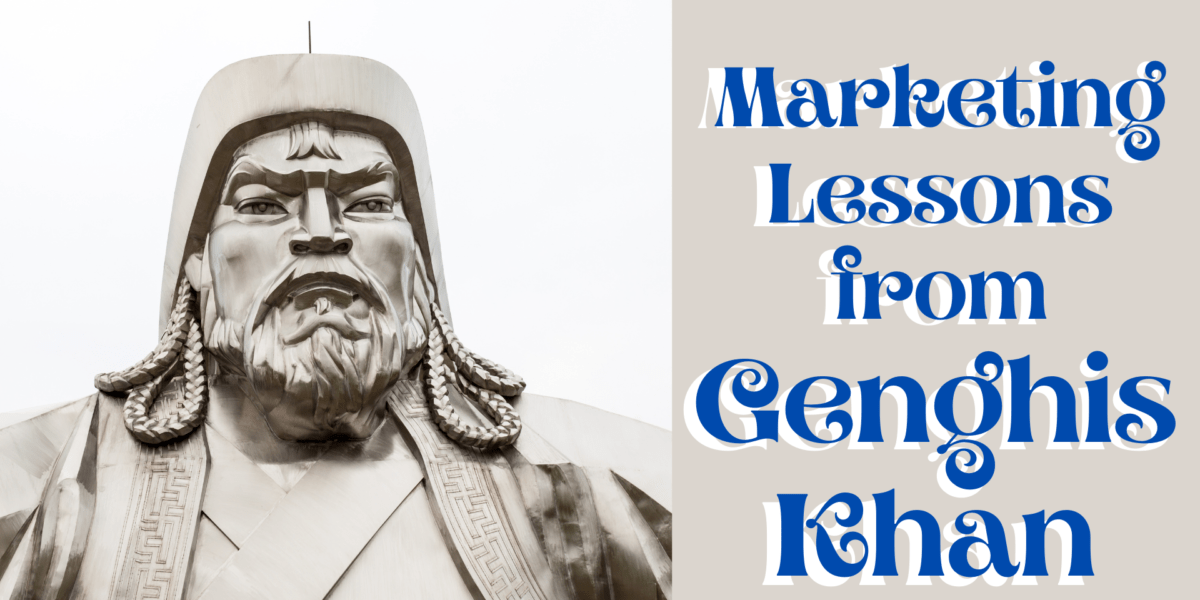 If you were asked to name a marketing genius, who comes to mind? Would it be Apple’s Steve Jobs, who created beautiful consumer tech and our desire to own it? How about Amazon’s Jeff Bezos, who literally changed the way the world shops? Or, SpaceX and Tesla’s Elon Musk, who disrupted both the state-sponsored space industry and the petroleum-powered auto industry?

All had incredible vision, technical savvy, unstoppable resolve and off-the-charts communication skills. And they also knew how to use marketing – from advertising to Twitter.

Those same traits were also present in a guy named Temujin, a.k.a. Genghis Khan. 800 years ago Khan conquered an area approximately three times the size of the United States with a core army of about 100,000 men — and marketing. He knew how to move people to action — and usually, that action was surrender.

Genghis Khan also knew how to communicate a vision and motivate people to join his cause. In 1158, his fellow Mongolians lived in mostly small tribes of 300-400 people or fewer. His own tribe had less than 20. But he fought larger tribes bravely and convinced them to join him by sharing his vision: One Empire. They and their families would have safer, happier and more abundant lives if they banded together under his rule and worked and fought as one.

As tribes joined, Genghis began positioning and branding. He had a special banner made from horsetails of each tribe to represent his new combined force.

As Genghis rolled across the continent, he’d attack a large fortress city. He’d slaughter everyone — man, woman and child — except for one able-bodied resident. He’d give that lucky individual a fine horse and a pouch of silver and set him free. The freed man rode to the next fortress town and described the horrors of the siege he witnessed. After that, most of the following towns surrendered without a fight.

When Genghis came to a walled city, he put up a large white tent near the front gate. This meant they had 24 hours to surrender and all would be left alive. Then the black tent went up. That meant every male 16 and older was going to be killed, but the rest could leave. If they didn’t surrender at that point, the red tent went up. That meant everyone would be killed. After the first one or two times, the red tent was rarely needed.

How did Genghis stay in touch with home base — his family and suppliers? He had small manned outposts set up a day’s ride apart, all the way from home to wherever the army roamed — at one point 5,000 miles away. Messengers on fast horses would ride to the outpost and pass on the scrolls. A fresh rider and horse would ride to the next outpost until the message got to the recipient.

Finally, Genghis created an early version of click bait. His warriors would attack an opposing army and then act like they were getting beat. They’d stage a choreographed retreat with the enemy running or riding behind them, thrilled that they were routing the brutal Mongols. But Genghis’s gang were just leading the enemy into an ambush. As they followed, they were flanked, blocked and cut down.

Jobs, Bezos and Musk understood and used marketing strategy and force of will to accomplish their goals. Genghis Khan did the same, securing land, riches and a common identity for his people. And he didn’t even have Twitter.

“Never pick a fight with people who buy ink by the barrel.” is a quote often attributed to Mark Twain. It’s a warning, telling us to stay on the good side of newspaper publishers. The people who ran newspapers were powerful and could make you a hero or a reprobate …