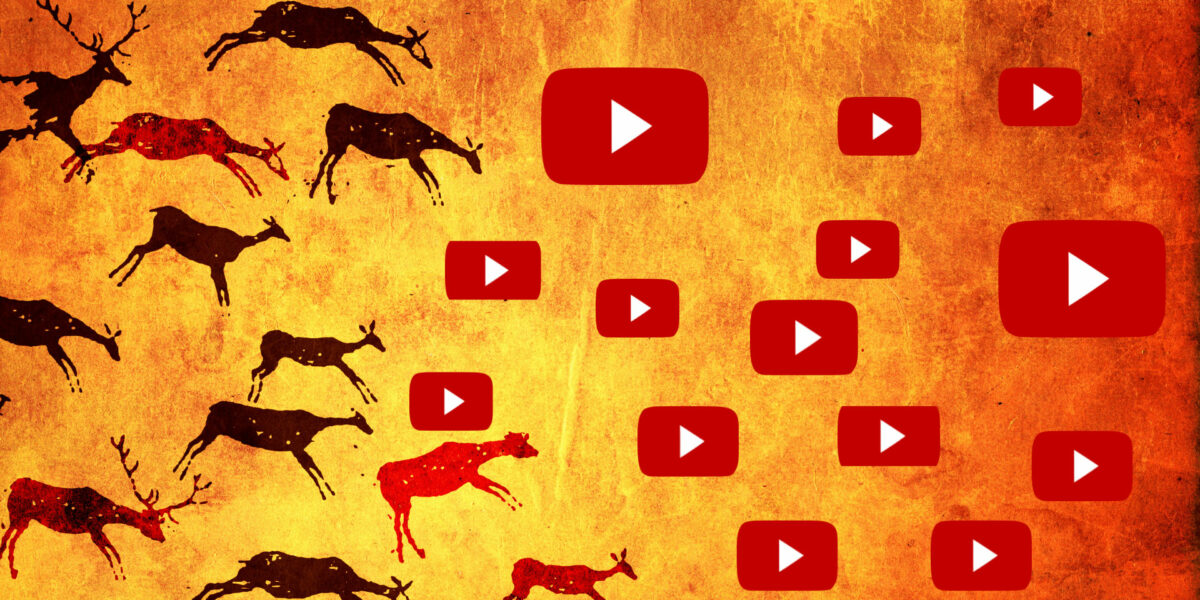 It’s sometime during the Paleolithic Age (aka the Stone Age) near what is now Spain. A cavewoman named Canta and caveman named Lopa are spear fishing in a river. “So Lopa,” says Canta, “What’s new?” “Same ol’, same ol’ for me.” replies Lopa. “But some of our friends saw one of those giant winged dinosaurs last night…”

“Dude! A winged dinosaur? That’s crazy.” says Canta. “How do you know?” “There was a new illustration on the community cave wall this morning. It tells the whole story.” says Lopa. “I’m surprised you didn’t see it. I think it has 100 or so views already.”

“I’ve been trying to cut back on checking the cave wall.” Canta says upset, “Once I start, I end up spending hours on that.” “I know what you mean.” says Lopa, “How can we ever evolve as a species if we are always reading cave walls?” “True that.” agrees Canta.

It seems like civilization has always had a primary media choice that served as society’s source of education, information, news and entertainment. At one time it was cave walls, later it became town criers and newspapers. Still later, it was the trusty radio and eventually three giant television networks became the must-have, must-watch media of choice in America.

Today, the largest video aggregation of education, information and entertainment might be YouTube. According to fortunelords.com, over one billion people use YouTube. YouTube gets 30 million visitors per day and 300 hours of video are uploaded every minute!

YouTube is unique because anyone can post a message that can potentially make them millions of dollars. YouTube owner Google will put ads on your videos and pay you $68 of every $100 it collects. So far, individuals and small groups have produced the most content and made the most money.

Forbes reports that the top earner was nine-year-old Ryan Kaji, with $29.5 million in earnings, 12.2 billion views and 41.7 million subscribers. He’s famous for so-called unboxing videos, in which he takes toys out of their packages and reviews them.

The second highest earner is Mr. Beast (Jimmy Donaldson) with earnings of $24 million. His videos are a mix of stunts and humor: In the last 12 months, he has frozen himself in ice, gone around a Ferris wheel 1,000 times and constructed the largest Lego tower ever.

The third highest earner is the Dude Perfect channel with $23 million in earnings. It features five young adult males who have fun playing with lightsabers, Nerf Guns and paintballs.

New media choices mean new opportunities to promote your brand, your products and services. According to fortunelords.com, about 9% of U.S. small businesses are advertising on YouTube.

With YouTube ads, you pay only for what was seen by viewers. And it’s easy to target the right group by what they are watching. That makes it a very cost-effective advertising option for small business.

Canta and Lopa would probably be YouTubers if they were around today. They might have a channel called Prehistoric Pranks or Top Cave Remodeling Tips. And they would probably give you this advice: if you don’t want to be extinct, adapt to new media choices like YouTube.

If you’ve read, heard, or watched any developments in Artificial Intelligence, you’ve probably heard the paranoid whispers that one day an army of AI robots will rise up, take over the world, and enslave the human race. That’s crazy, right? Maybe not. What if… I mean…what if? What if the …