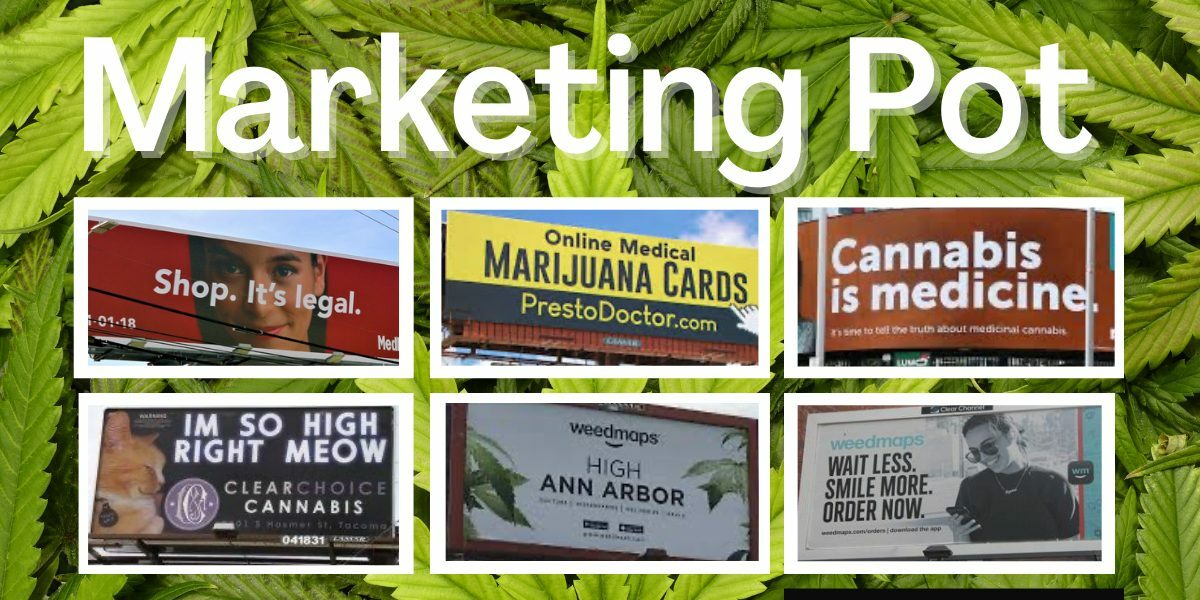 Buying marijuana is not something Americans are used to doing out in the open. Many recall a scenario in which one friend scored the pot and brought it to his or her friends.

Comedians Cheech and Chong had a routine featuring a character named “Dave,” who runs out to buy weed, for him and his stoner buddy.

Buying pot has gotten a lot easier since medicinal, and now recreational, pot sales have become legalized in select states. But even though sales are legal, the marketing remains strictly regulated — for now. In many states, marketing cannabis with testimonials or showing anyone using the product, is forbidden. Digital marketing and social media marketing are heavily restricted.

That’s not going to stop the corporate cannabis crowd. They have too much money invested and too much potential revenue to give up and just follow those regulations. According to Statista:

“In the United States, sales of legal recreational cannabis are expected to reach an estimated 25 billion U.S. dollars by 2025. Legal marijuana sales are forecast to increase steadily with each consecutive year. The number of cannabis consumers is likewise expected to grow in the United States: by 2025, the country is projected to have close to 50 million consumers.”

So cannabis dispensaries attempting a branding-only, or a directional or informational approach. Some are sponsoring events, or hiring social media influencers. Some are challenging the regulations. They have good reason to believe they will prevail. Lawyers had lots of rules against advertising their services. That changed in 1977 when the U.S. Supreme Court struck down prohibitions against legal service advertising.

Cannabis companies are marketing with the help of organizations like Weedmaps — a tech company serving the cannabis industry. Weedmaps sometimes uses a directional or informational approach. “Weed is Legal in 60 Miles” reads a Weedmap billboard on the highway. Some of their ads attempt humor. “High Ann Arbor.” reads one billboard as if welcoming you to the city.

MedMen, which describes itself as “…the premium cannabis retailer of the United States,”offering “an unparalleled shopping experience at all of our 25+ stores….,” has stores in California, Nevada, Illinois, Arizona, New York & Florida.  MedMen’s marketing is a mix, many with the simple message CANNABIS written across a lifestyle photo on a billboard along with the location of one of its dispensaries. Some are more aggressive with two sentences, “Shop. It’s legal” across the smiling face of an attractive female.

Defending the sales of the product is a common theme also. The pot sellers want to help you justify your purchase and help remove the stigma of buying their product. Hence, “Cannabis is Medicine” can often be seen in headlines. “So is Tequila,” one is tempted to reply.

One of the weirdest examples I’ve come across is an ad from Clear Choice Cannabis in Tacoma, Washington, which features a cat and the headline, “I’m so High Right Meow.”  I couldn’t find that flavor on their website, but they did offer Apple Fritter, Gelato Cake and Cookies and Cream — thereby successfully giving me the munchies without even sampling their product.

Some dispensaries also deliver. You pay for it online first, and with prices “hovering mostly between $10 and $11 per gram” ($280-$311 an ounce) according to the Dayton Daily News, you can bet the buyer lets Dave in when he knocks on the door and “has the stuff.”

The 1962 movie The Manchurian Candidate is a psychological political thriller about the Cold War and sleeper agents. The plot centers on Raymond Shaw, a U.S. soldier in the Korean War who is captured and brainwashed by communists. He is released and returns to civilian life in the United States. …