How to Defy Industry Image and Kill the Competition 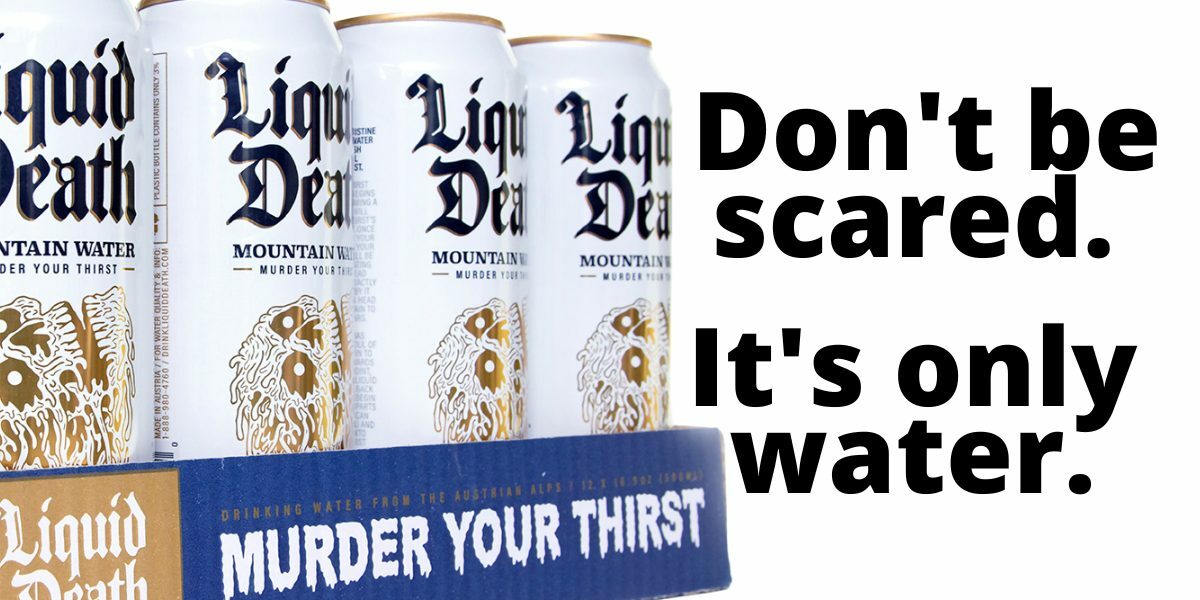 Imagine you’re picking up your “perfect angel” seven-year-old daughter from a birthday party of one of her school friends. You walk in and see a drowsy kid on a couch. Another is stuffing his face with cake, while one appears to be puking. Not that unusual for a kid’s party.

But most of the kids, including your angel, are laughing hysterically and dancing wildly to “Breaking the Law” by Judas Priest, blasting from stereo speakers.

You’re still not alarmed until you notice most of the kids are drinking, make that guzzling, from tall boy cans as they dance. You see a discarded empty on the floor. The brand is clearly labeled and reads “Liquid Death.”

Liquid Death? Are the kids drinking beer… or some high-caffeine energy drink? You’re horrified. That’s when you notice the mother of the birthday boy waiving to you. She’s nine months pregnant and…OMG… she’s drinking a can of Liquid Death also!

That’s right…water. The scenario I described above was actually a 30-second commercial for Liquid Death, a new drinking water sold in a 16.9 fl. oz cans instead of plastic bottles. Its tagline is “Murder Your Thirst.”

Liquid Death was founded by Mike Cessario, a former skateboarder who played in a heavy metal band. After graduating from college, Cessario worked at several top ad agencies.

Cessario noticed how creative within certain categories seemed to stay in the same channel. One categorywith that issue was drinking water.

Cessario wondered why most drinking water advertising was focused on health. Advertising for beer, candy, snacks, and other consumables often had funny or light themes. “Why can’t ads for drinking water be fun?”

Cessario wanted to test his theory when he started his water company in 2019.  But he was entering a crowded and competitive market.

HIs brand would go against brands that had millions of advertising and sponsorship dollars. He knew his brand had to be outrageous —not just different — if wanted to break through, create awareness and demand.

Cessario chose the brand name “Liquid Death” began packaging and presenting it as if it were beer.  “The Liquid Death brand name is sort of double edge sword,” says the founder. “People who never heard of us, but are looking to buy drinking water, may walk by Liquid Death because they think it’s beer.”

But the flip side has all been positive. According to Forbes, Liquid Death registers strongly with young people and kids. It’s very high on the “cool scale.”  That coolness has translated into over $45 million in sales in 2021.

Liquid Death can now be found stocked in chains like Trader Joes, Whole Foods and others, right next it’s tamer-image competitors.

You might want to check out some very creative ads and promotions on the Liquid Death YouTube channel. The original video is hard to forget since it features a water boarding.

How do you increase sales when the market is nearly saturated with products similar to yours? One way is to produce another version of your product that appeals to a new or wider market. That’s what Miller Beer did in the 70s, when they took advantage of the new fitness …