Only the Strong, Smart and Lucky Win the Business Wars 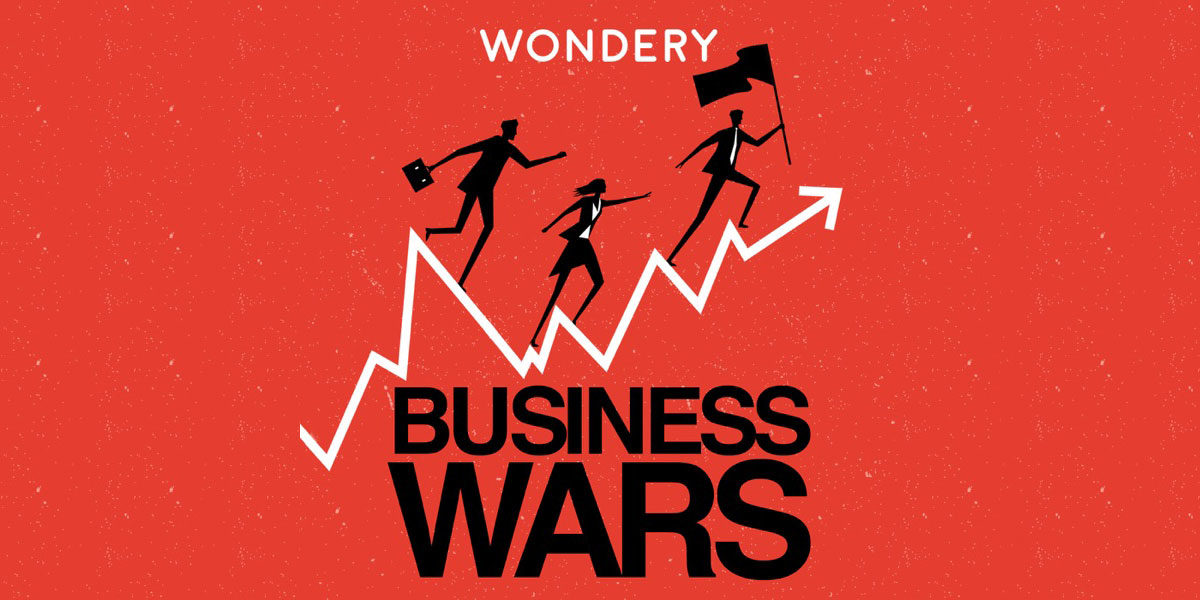 Political divisiveness is sure getting nasty, isn’t it? American political parties punch it out on every issue — lying, cheating and seeking to cripple the competition.

Well let me tell you, American politics are child’s play compared to American business. Some of America’s most recognized companies have surprising back stories.

It’s hard to imagine how companies who sell nice products like candy, dolls and even board games must sometimes battle their competitors and fight to survive.

If these stories were contained in a book, it would be my favorite business book. But these fantastic business battles and survival tales are actually in a podcast called Business Wars.

Business Wars reveals the inside strategy and struggles of many famous companies. You’ll hear key conversations recreated as well as snappy narration as events unfold.

Business Wars is produced by a company called Wondery, the largest independent podcast publisher in the world.

Launched in 2016, Wondery became the fastest network to join the Top 10 ranking by Podtrac. It features hit shows such as Dr. Death, Dirty John, American History Tellers, The Shrink Next Door, Gladiator, and my favorite — Business Wars.

There are more than 30 “wars” presented on Business Wars. Some of my favorites are:

Some wars demonstrate how procrastination can lead to disaster, or how the little guy can beat the giant at their own game — for a while.

Guitar Wars is a good example. Les Paul presented his revolutionary prototype of a solid-body electric guitar to executives at Gibson in the early 1940s — and was literally laughed out of the room.

Subsequently, Les Paul showed it to Leo Fender, who was making guitars one-by-one out of his garage workshop. Fender took Les Paul’s idea (though not his design) and by the early 1950s was mass marketing the first commercially successful solid-body electric guitars. Shaken by the competition from this upstart firm, Gibson designed its own solid-body electric — and asked Les Paul to endorse it. Decades later, the Gibson Les Paul and the Fender Stratocaster remain the most popular electric guitars.

The 70-Year Doll War proves that in the toy business, strong brands can only endure if they learn to adapt.

Hasbro and Mattel were “newbies” in the toy business in the late 1940s. Hasbro was a pencil manufacturer — toys were only a sideline. In 1952, Hasbro sold Mr. Potato Head kits and scored its first hit toy, and also began using TV Advertising, which was unheard of for the toy industry.

Mattel, a husband-and-wife start-up, created the well-known Barbie doll. The Handlers first got the idea after seeing their daughter use paper dolls to role-play the lives of adults. Then, after taking a family trip to Switzerland, Ruth Handler saw a female doll in a toy store window (which turned out to be a risqué novelty doll) and wanted to make a doll just like it. Ruth Handler named the female doll Barbie and the male doll Ken — after her two children, Barbara and Kenneth Handler.

Hasbro tried to beat Mattel in the doll business by creating G.I Joe — the action figure for boys. But Hasbro couldn’t keep up with Barbie — the best-selling doll ever. Hasbro came back in 2014 by stealing away the Disney Princess line from Mattel. By 2017, Hasbro had replaced Mattel as America’s biggest toy maker.

We all want world peace. But if you also want to hear how companies fought their way to the top, you can’t beat a good war — Business Wars.

The recent pandemic stirred a surge of panic buying of toilet paper, resulting in empty store shelves and even a few fistfights over the few rolls that were available immediately after that. Some people called it a “shortage,” but that’s a misnomer. Americans use about three rolls a week, and …